Festival of the Lion King
at Lion King Theater
Click for PHOTO ALBUM! 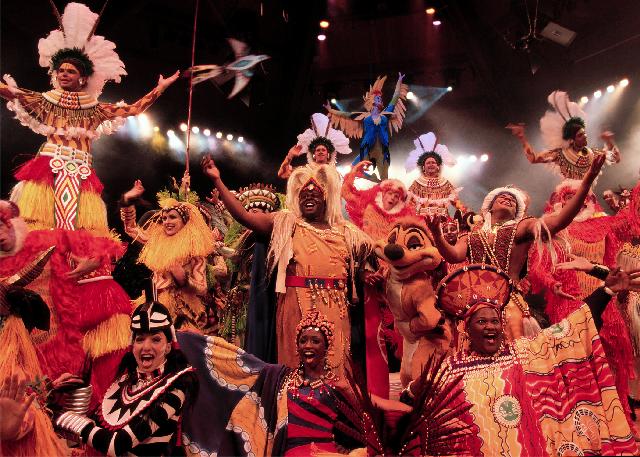 A high energy, tribal celebration of song, dance, and acrobatics with your favorite Lion King friends.

From a Disney press release:

"Festival of the Lion King" -- Animal heroes of "The Lion King," one of the world's favorite classic Disney films, star in this all-new spectacle that combines the pageantry of a parade with the excitement of an African tribal celebration. Staged in a hexagonal timber structure with the atmosphere of an Adirondack summer theater, the show puts the 1,375-guest audience right in the middle of the excitement.

Four giant rolling stages move in from two directions as costumed performers and colorful props sail through the air above the audience. Guests sit in triangular sections labeled elephant, giraffe, warthog and lion.

To the right, Simba is a giant animated figure, 12 feet high, sitting atop Pride Rock. To the left is Elephant Waterfall, where a playful pachyderm spouts water from his swaying trunk. Another stage is dominated by a swaying giraffe and a fourth is the jungle stage where Pumba and Timon reside.

Singers in African tribal robes open the show with a rousing chorus of "I Just Can't Wait to be King." The center stage doubles as a trampoline for costumed aerial performers portraying a troop of acrobatic monkeys flying through a happy rendition of "Hakuna Matata." "Be Prepared" sets the theme for a mock battle of tribal warriors on stilts.

High-wire aerialists hit the high notes dressed as giant birds in a love duet that literally soars to the tune of "Can You Feel the Love Tonight?" The show comes full circle with a full chorus of "The Circle of Life" followed by audience participation in competing groups for "The Lion Sleeps Tonight." The show's 50 performers return for the rousing finale of a medley of songs from the film.

The 28-minute performance is staged at least eight times daily in Camp Minnie-Mickey.

Last updated on by host@wdwent.com